Sitting on a flight from Curaçao to Suriname, to arrive at Paramaribo airport around 1 am, I suddenly realize I have no idea what to do or where to go once I get there. Picture me roaming the streets desperately searching for a place to sleep? I’d hate to disappoint, but…

…the latter couldn’t be further from the truth. Luckily.
What is very much true, is that at this point I have gotten so used to traveling around the world that I usually don’t even bother with making plans or arrangements for new destinations. Everything always seems to work out one way or the other. I guess I figured arriving in Suriname would be no different.

However, this seasoned little traveler had not taken into account that there are also places in the world where finding accommodation is not as straightforward as taking your next breath, or that 1 o’clock in the morning is not exactly what you would call the most ideal time to be arriving in Paramaribo. So what did I do?

Oh, you know. A miracle happened. Her name is Jolanda.
She gave me the warmest welcome to Paramaribo, and with that the best impression of Surinamese culture and hospitality.

Before arriving in Suriname

At the airport in Curaçao

I have a reputation of talking too much. And although that might be true (what do you mean I never shut up?!), it has helped or gotten me out of nasty situations plenty of times. 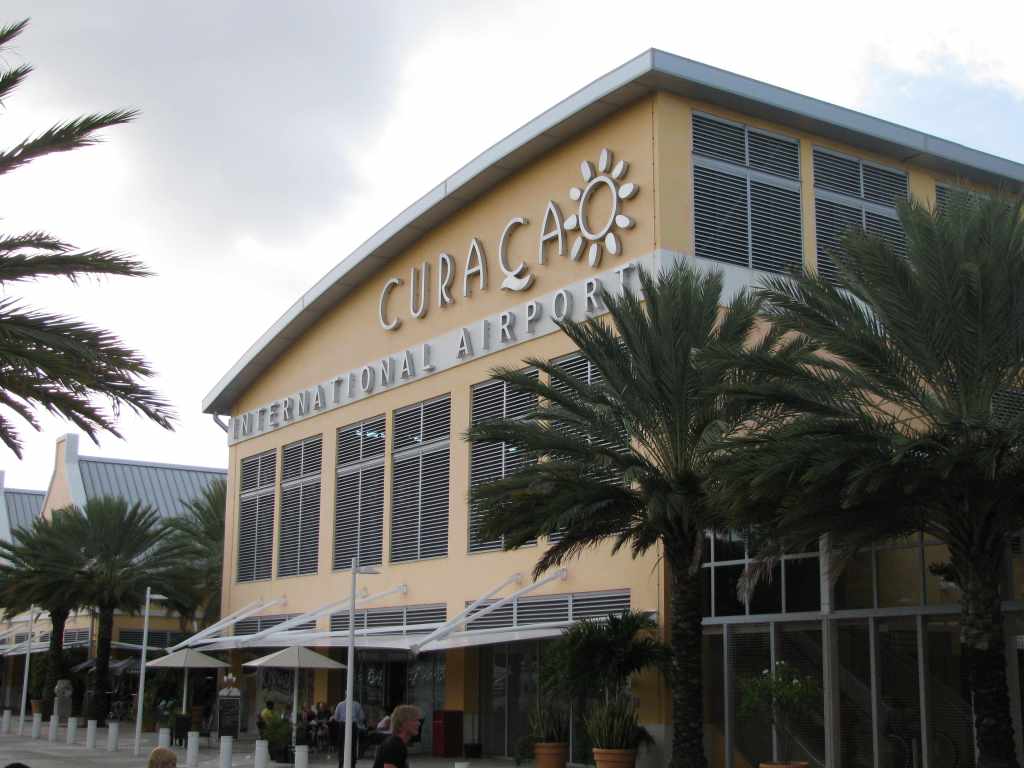 So I am sitting at the airport in Willemstad, and somehow I get to talking with a nice Surinamese lady sitting next to me in the waiting area. She tells me she is living in the Netherlands with her son and Dutch husband. They were on summer holiday in her homeland, but decided to also visit the Dutch Antilles.

At some point in our conversation she asks me where I would be staying tonight. In the most nonchalant of ways, I answer: “Oh, no idea really. Haven’t made any arrangements yet. Would you happen to know whether it is hard to find a place to sleep in the city?”

She answered my question like any concerned mother would. “What?! Are you absolutely out of your mind?!”

On the flight to Paramaribo

In the meantime, we had boarded the plane. It was already late at night, so besides her sudden outburst of emotion there had been nothing but silence around us.

She turns around to face her husband, who is now staring at her along with tens of other passengers who looked up from their books or personal conversations wondering what possible reason this woman could have had to suddenly raise her voice at a stranger like that.

She blinks, turns around again to stare at me in disbelief, and promptly says: “Uh-uh, no way. You are staying with us tonight, in our family home in Paramaribo.”

Uhh… Yeah. Sure?
I mean, who would say no to an amazing offer like that! 🙂

My accommodations in Paramaribo

Staying with a Surinamese family

Upon arrival, my massive backpack was stuffed into their taxi, and I was instructed to take a seat inside. Yes ma’am. I knew this lady wasn’t one to mess with. She gives you an order, you listen. 😉

We arrived at the house around 3 in the morning, everyone being extremely exhausted. Her young son had already fallen asleep in the taxi, so she puts him to bed as soon as we enter the house. Then she points to one of the other bedrooms, shows me where the bathroom is, and tells me I should really get some sleep. Good night!

The next day I got up around 9am, was presented with a lovely Dutch breakfast of bread and cheese (!), and they suggest that I call a number of hostels in the city.

With a coffee in one hand, a phone in the other, I started looking for available ho(s)tels in Paramaribo. I realize I was incredibly lucky to have met Jolanda when I did, because all of the budget accommodations in the city were fully booked!

Eventually, I did manage to book a hostel for that same night, but things weren’t looking good for the rest of my time in Suriname…

I checked into my spacious room around 11am, to then spent almost all day typing away at a translation assignment, which needed to be handed in that same night. So there I was, sitting on my balcony occasionally looking up to my view over the “Palmentuin” (Palm Tree Garden). Not too bad of a scenario for a working day, right? 😉

Zus & Zo is housed in a beautiful colonial building right across from the Palmentuin, and encompasses a guesthouse, restaurant, gift shop, and travel agency all wrapped up in one. Some of the rooms have private balconies, but everyone is free to use the artistically decorated yard and patio areas.

I had a great night sleep in my private air-conditioned (!) room with two beds (one of which ostensibly superfluous, but incredibly handy to dump all my stuff on!).

After breakfast, I immediately started planning with the lovely reception staff to see as much of Suriname as possible in VERY little time. It was a great success!

Within an hour, I had decided I wanted to wander off into the Surinamese Amazon for 3 days. I would sleep in a hammock for 2 nights, and get to know the surrounding indigenous villages.

Staying with a Surinamese bachelor

When Jolanda found out that I had not been able to find any accommodations with availability for the remainder of my nights in Paramaribo, she came up with an alternative plan. Why didn’t I stay with Ryan, her nephew, who was currently living in her old house on the Govindstraat?

“Look, it is not much of an offer. The house does not have any spare beds, it is not fully equipped, and…” – again, motherly concerns 😉 – “…but I could lay down an inflatable mattress for you?”

She concluded by asking me whether that would be something I would consider a possibility? Ha! Are you kidding me?

A private house with my own room, a comfortable mattress, kitchen, living room, TV, and a positively insane nephew to keep me company. And all of that for FREE?! That sounds more than perfect!

In other words, it was a done deal. At 1pm the next day, I agreed to meet Jolanda and her family for lunch. On my way to the riverside called “Waterkant”, I went for a quick stroll through the Palmentuin. Later in the afternoon, she took me to the house.

Within half an hour, it had become obvious to me that Ryan wasn’t only extremely sexually frustrated, but also completely and utterly insane (in a good way). Suffices to say that we had a lot of fun. Or maybe I should say that I had a lot of fun.

Partially at the expense of Ryan. I mean, who tells a completely stranger how long he hasn’t had any action?! Uhh… Welcome to Suriname, baby!

Is my ‘garden’ getting enough water? Has the ‘lawn’ been mowed? Do I have a fixed gardener to take care of my ‘natural paradise’?

Oh dear! I got myself a one-way ticket to the loony bin… With a resident who is worse than all Latinos combined! 😛

No need to worry though. As soon as I had made it perfectly clear to him that my garden did not need any maintenance, we spent the next few hours listening to music and talking about Surinamese culture, food, and history.

Ryan had to go to bed really early, because soldiers in Suriname have to get up at 4.30am every day. And so would I tomorrow, because I was going to go to the jungle! 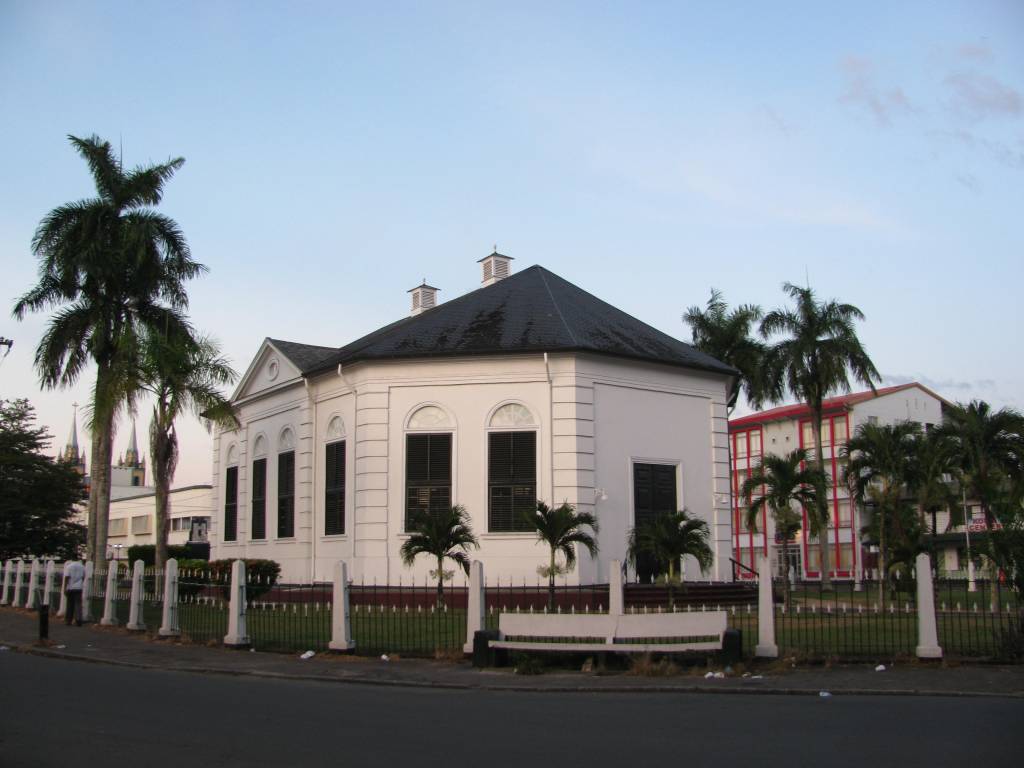 A visit to the Palmentuin makes for a nice stroll on your way to and from the city center. But really, in my opinion it looks much nicer from above. Seeing the palm leaves waving in the air definitely beats staring at their trunks.

De Waterkant is one of the most popular streets in Paramaribo, and definitely worth a visit. Some of the city’s most beautiful – somewhat or even completely dilapidated – colonial buildings can be admired here. The street is also home to important buildings such as the Central Bank of Suriname and the Lutheran Church.

Finally, the Waterkant offers locals and visitors a wide range of kiosks, eateries, and other food stands, along with benches and trees for some very welcome shade.

The Central Market is a great place to find whatever you may be looking for. Food, clothing, souvenirs. You name it, the market sells it. And it opens every morning at 5am!

Check out Paramaribo’s central bus “station” on the other side of the building for minibuses that can take you anywhere in the country.

After spending a few days in the Surinamese jungle, Saturday night was the time to test Paramaribo’s nightlife by hitting the clubs with my new Canadian friends.

Great music, refreshing cocktails, and dance floors full or rhythmic experts. I am pretty sure we all approved of the scene. What’s not to like?! 🙂

Jolanda and her family took me to White Beach for a day of fun and relaxation. Located in the town of Domburg on the Suriname River, and not the Atlantic Ocean as you might have expected, White Beach is the only “beach” in Suriname. Why the quotation marks?

You tell me. If white sandy beaches don’t exactly spring to mind when you think about Suriname, you are absolutely correct. Why a country with a relatively large coastline and located in the Caribbean would not have a single ocean beach, is indeed baffling. Fact is, Suriname’s natural shores mainly consists of mud and clay. Man-made White Beach is therefore a popular exception to that rule.

Either way, White Beach makes for a wonderful day out. Feeling tired or missing the beach during your vacation to Suriname? White Beach is a great place to relax and spend some quality time with your friends or family.

Play around in the water with all the excited children, enjoy a picnic of your own making (or visit the beach-style restaurant), and grab yourself a hut and hammock to re-charge for the rest of your trip. 🙂

[Coming soon: Life on the river in the heart of the Surinamese jungle]

Have you ever been to Suriname?
(Fess up. Had you ever heard of Suriname? 😛 )

Would you like to go after reading this post?
I promise it’s a pretty amazing country, a hidden gem in South America!